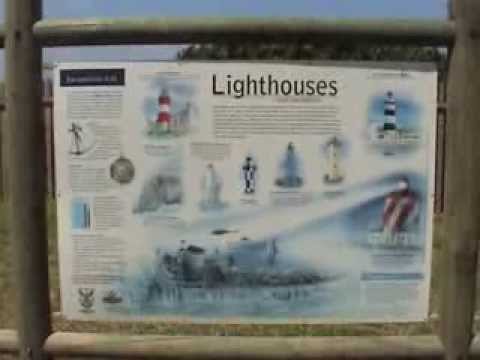 Explore the little Lighthouse in Port Shepstone with us!

The lighthouse is situated at the mouth of the Umzimkulu River at the entrance of Port Shepstone on the Kwazulu-Natal South Coast. The town was named after a well-known statesman in native affairs, Sir Theophilus Shepstone.  The lighthouse is equipped with a radio beacon and fully automatic. It is run off the main supply and has two standby diesel/alternator sets.

The Port Shepstone lighthouse was developed out of a signal station, which was used during the time that Port Shepstone was an operating Harbour. The signal station was replaced by the present cast-iron structure of the lighthouse in 1906. This structure came from higher up the coast, Scottburgh, where it had been used to mark the southern end of that famous hidden reef, the Aliwal Shoal.

Before these developments, an ordinary ships masthead lantern was exhibited at the top of a ladder-like structure and came into operation in 1895.

The lighthouse is painted in black and white cheques has become a familiar landmark to people who visit the quaint little town of Port Shepstone, which is approximately a 2-hour drive south of Durban. The coastline running south from this beacon is notorious for its wrecks, in fact, this stretch of coastline between Port Shepstone and Cape Hermes at Port St Johns is particularly dangerous.

Probably the most famous of these wrecks are the Sao Joao and the Grosvenor. The Sao Joao, a richly laden Portuguese Galleon was wrecked with its alleged riches have never been located. The Grosvenor sank beneath the waves off the Pondoland shore with her hoard which legend insists included jewels, gold and silver bars and some say the fabulous Peacock Throne of the Moguls believed to be worth well over 1.1 Billion Rand.

Razor-sharp rocks, strong currents, pounding surf and inaccessibility to this wreck has put paid to recover any treasures that might lie beneath the murky waters.

Join our extended family on our YouTube channel for a picture-perfect representation of anything and everything holiday, travelling and paradise related.

Feel free to browse through our website to view all of the superb holiday accommodation units that we have on offer.

We invite you to leave us a FACEBOOK RECOMMENDATION or GOOGLE REVIEW.

We want to see you, our extended family @leisureletting

View the Unit
Scroll To Top
Open chat
1
Hi! Thanks for visiting us!

How can we help you?